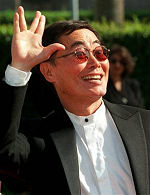 George Takei has come out of the closet and simultaneously revealed he has a partner of 18 years.  Kudos to Mr. Sulu.  I'm glad to see he's now comfortable enough to be open about it.

I'll have to disagree with Orac at Respectful Insolence on this one.  As a Trek fan and having met George Takei on several occasions, this comes as no surprise to me.  Think 'dar.  Its blaring klaxons were definitely a hint.

I did expect it sooner, either voluntarily or forcefully, and am surprised it took this long.  I don't know why I expected it earlier, though.  As a Japanese-American, he had to live in a U.S. internment camp from age 4 to 8 because of the war.  That experience not only helped engender shame of his ethnicity, but it also would have made him think twice about adding himself into yet another minority bin knowing precisely what America was capable of doing.

Well, I wish both of them the best.

Lacking interest of any kind in demonstrating the social skills necessary to inhibit such things, allow me to add this: George's announcement gives new meaning to James Doohan's line at the end of Star Trek VI when, referring to the Excelsior (a ship) and Takei's Sulu character, he says "Not so big as her captain…"  Insert childish laughter here.