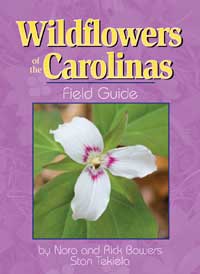 Two years ago when my first published photo hit the market, I had already prattled ad nauseam about the subject due in no small part to the ebullient enthusiasm I felt at being contacted about, let alone paid for a picture that would be included in a book.  And when I received my complimentary copy of Adventure Publications’s Wildflowers of the Carolinas, I spent the first week permanently creasing the pages by flipping through it and looking at the image that carried my name and copyright.

Since then my photography has been licensed several times for several uses, and by organizations as diverse as Cornell University and the U.S. Army Corps of Engineers.  And in one case, the pictures and corresponding blog post were licensed together.  But did I mention those things?  Did I jump up and down and post about the good news?  Did I even send an e-mail to Mom to let her know?

I don’t know why I stopped doing those things.  Part of it I can blame on the convenience of Facebook and Twitter.  Tidbits like these events became easy fodder for social networks, small soundbites that could be tossed out with nary a consideration.  But what of those who don’t use social networks?

So when I recently changed by blog’s theme and added my Twitter feed to the sidebar, this error came back to get my attention.  Mom noticed a little something about one of my photos being on the cover of a book.  In response, she sent an e-mail that included this:

You never mentioned one of your photos was on a book cover. Anything else I would be interested in?

She meant it with all the pride a doting mother could bestow on her beloved child, yet her phrasing was eerily biting in directness.  I laughed at myself because it smelled of the oft sarcastic tone I employ when ribbing someone, a skill that earned me kudos many years ago by my employees and bosses who spoke in terms of my ability to insult someone in a way that left them thanking me for it afterward.

Yet childish giggling aside, Mom’s missive did remind me that I’d grown all too comfortable with throwing such news into the social network queue with the idea that everyone would see it.

Heck, I even started putting together a new gallery on Facebook where I could show which photos were licensed and for what, a project in direct response to many people there who congratulated me each time while asking to see the photos in question.  It seemed like an appropriate blog chapter as well, but did I even think about doing that here?

So with apologies to Mom for my slacker tendencies in this area, I’m now acting to correct this error.

First, I’ve created a new category called Photo News that will include all relevant material, including old posts (once I move them over there) and all future posts (as I create them).

Second, I’m beginning a new series of posts to cover all licensed photos.  I intend to show the whole original picture along with the previously posted image that brought someone to my table with their photographic cup held out with hope.

And third, I will use the new series as the basis for my new Facebook album that will show to those folks which images I’ve licensed and to whom those images were licensed.

Oh, and I promise to do a better job in the future of sharing that information here as well as on social networks.  I owe it to the innumerable fans who throng outside my home waiting for yet another visual crumb from my vast yet elusive photographic table.

8 thoughts on “With apologies to Mom”